Lesbian relationship goals: where to find lasting romance in Canada 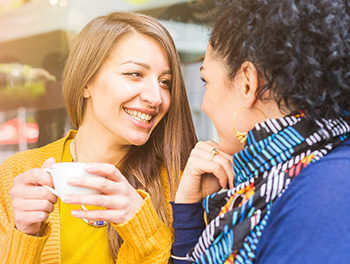 Single gay woman looking for lasting love in Canada? You’re in luck! Our latest study has looked at anonymous data from 4700 single lesbians to find the average importance that women from each province assign to marriage, monogamy, and romance. From life-long love to wedding bells, here’s where you can meet women seeking women who share your relationship goals.

For this study, we analyzed anonymous data from 4700 randomly selected single lesbians dating via EliteSingles. Specifically, we looked at the average levels of agreement with three ‘relationship goals’ style statements:1

From there, we split the data by location to determine the average importance rankings for each province in Canada. We were thus able to determine which provinces are home to the country’s most monogamous, most marriage-focused, and most romantic lesbian singles.

First up, monogamy, aka the most highly prized lesbian relationship goal in this study. It’s worth noting that, as EliteSingles is a dating site designed for single Canadians seeking lasting love, even the lowest ranked provinces on the list didn’t score low on the monogamy scale. In fact, monogamy’s average ranking was higher than the ranking for romance, and even higher than marriage. That said, some provinces do rank monogamy more highly than others…

And lesbian singles dating in Halifax have new reason to rejoice: Nova Scotia is home to the nation’s most monogamy-focused gay women.

Next on the list was Newfoundland and Labrador, making the top two an Atlantic province double feature. The top five most monogamous provinces were then rounded out by Ontario in third place, British Columbia in fourth, and Quebec in fifth, proving that you can find monogamy-minded women seeking women right across the country.

In order, the most monogamy-focused provinces of Canada are:

As EliteSingles is a site built for those serious about finding love, many of the women on our site are looking for a long-term match. Therefore, it should come as no surprise that another of the highly ranked lesbian relationship goals was marriage. Again though, once the averages were worked out, the study revealed that some provinces are more pro-marriage than others.

It turns out that those women seeking a marriage-ready match may want to brush up on their French flirting skills, as the most marriage-minded province is Quebec! An interesting aside – this study was repeated with gay men, and there too, Quebec topped the class when it came to desire for marriage.

Of course, Quebec was not the only marriage-minded province. Repeating its strong monogamy showing was Newfoundland and Labrador, which took out second place. Hot on its heels was Manitoba in third, with Saskatchewan (fourth) and Ontario (fifth) rounding out the top five. That makes three provinces – Newfoundland and Labrador, Quebec, and Ontario – with top five finishes in the monogamy and the marriage categories.

In order, the most marriage-minded lesbians in Canada can be found in:

Finally, we come to romance. Now, this might not be one of the biggest lesbian relationship goals – after all, it’s not like romance changes your life in the way that monogamy or marriage do. Yet, romance is still a real relationship goal for many single ladies and we’ve discovered where you can find Canada’s most romantic gay women (or at least those who believe they bring romance to their relationships).

Top of the pack is Ontario – wonderful news for those women dreaming of romance in Toronto or in Ottawa! It was followed by Nova Scotia in second place, New Brunswick in third, Newfoundland and Labrador in fourth and British Columbia in fifth.

For those keeping score, that means there are two provinces that had a top five finish in all three categories – Newfoundland and Labrador, and Ontario. That means, if you’re a single lesbian whose dreams include finding a monogamous, romantic marriage, then the way forward might involve learning about romantic cafes in Toronto, studying your Ottawa date ideas, and picking up tips on dating in St John’s.

In order, Canada’s biggest romantics can be found in:

When you mention lesbian relationship goals, it’s often not long before someone cracks that old joke about a second date and a U-Haul. Yet, as EliteSingles spokesperson Michael Middleton2 points out, this desire for connection is far more than just a punchline: ”from the outside, the LGBT community is sometimes seen as non-traditional, but in truth the search for long-lasting and committed love is simply a part of the human condition. We all want it, regardless of our sexuality.”

He also notes that ‘it’s interesting to see the differences from region to region, but more telling is that monogamy, marriage and romance are all valued so highly, and consistently right across Canada. The EliteSingles study goes a long way to prove that perception and reality are poles apart.”

Overall all then this study shows that, if you’re a gay women looking for a long-term girlfriend, or even a wife, then you’re not alone. All around the country there are women seeking women who want the same thing. So, what are you waiting for?

2 Michael Middleton is an author, editor, and spokesperson for EliteSingles. He has previously been quoted in publications such as Queerty and Gay Star News

Please note: Data used in this study cannot be traced back to the original user. To keep this study anonymous, only areas with significant numbers of responses were included.