What’s in a name? Canada’s favourite terms of endearment In Japan, you’re an egg with eyes (tamago gata no kao). In Spain, a lump of sugar (terron de azucar). In Russia you’re a little dove (golubushka), in Thailand a little elephant (chang noi), in Italy a little microbe (microbino mio), and in Flanders/Belgium a little round thing (mijn bolleke).¹

Every culture has their favourite terms of endearment and, as it turns out, Canada is no exception. In fact, our latest survey has uncovered the top pet names in the country.

When you’re in a relationship, how do you refer to your partner? If you’re Canadian, chances are the answer is Babe – our new study of 400 Canadians aged 18-55 revealed that Babe (or Baby) is the nation’s favourite term of endearment.

That said, if the apple of your eye is female, then she might prefer to be called Sweetheart: the survey revealed that this is the favourite pet name of Canadian women, closely followed by Babe, then Honey. Beautiful and Love round out the women’s top five.

Men’s top five cute nicknames are quite similar: they voted Honey as their top term of endearment, followed by Handsome, Babe, Sweetheart, and, lastly, Sexy.

However, not all nicknames are created equal, and the survey also discovered that there are certain terms of endearment that Canadians believe must never, ever be uttered (at least not if you want to stay on your partner’s good side!).

For women, the most hated nickname of all is Pookie, followed by Snookums, Bunny, Pumpkin, and Sexy. The list for men is again very similar, with one notable exception: as we’ve seen, men actually like being called Sexy. For men, the pet name that makes them cringe hardest is Snookums, followed by Pookie, Stud, Bunny, and Pumpkin.

Overall, Canadians despise Snookums the most – but it is a close run thing. In fact, Snookums beat Pookie to the ‘most hated nickname’ crown by just a single vote. 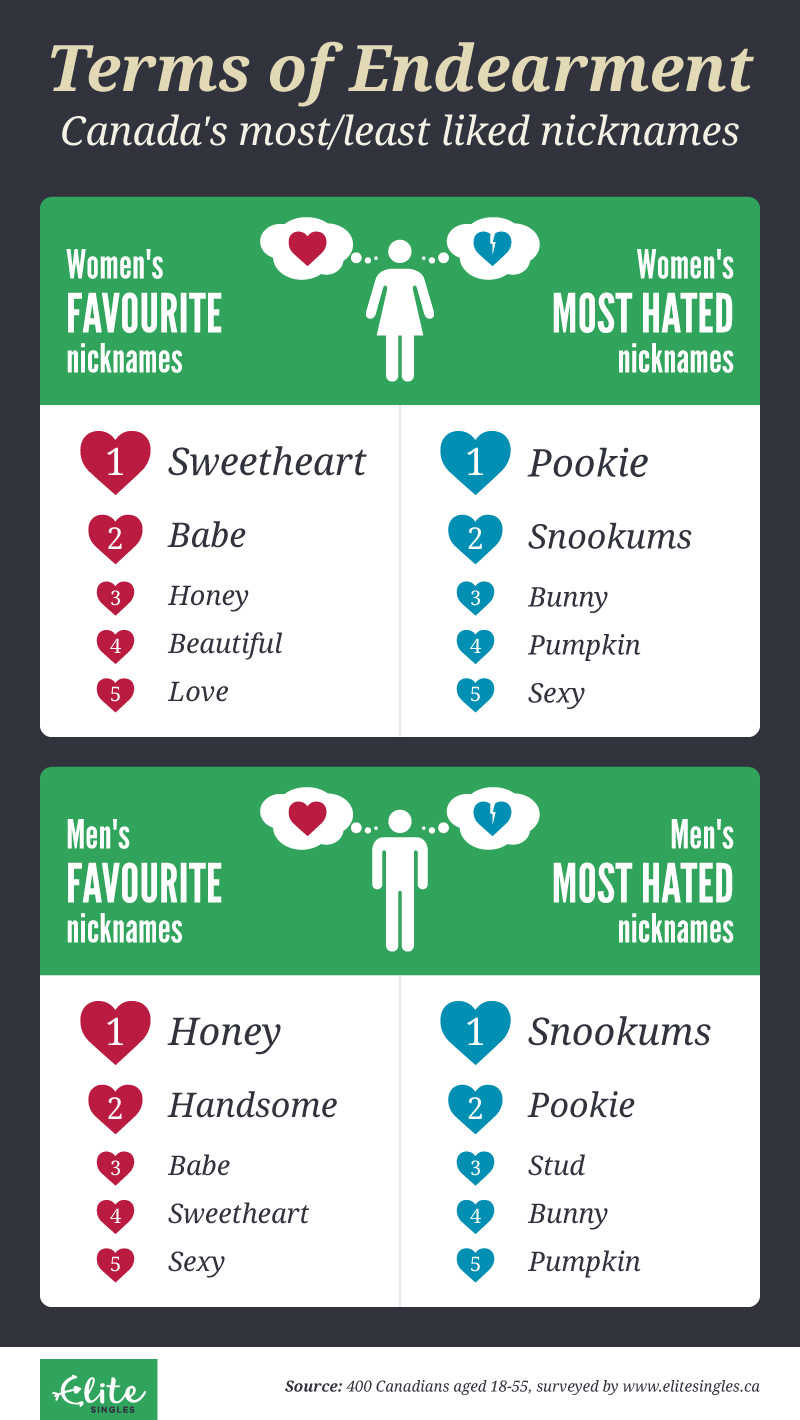 The popularity of pet names

So who uses these terms of endearment anyway? As it turns out, just about everybody! In fact, 92% of Canadians are in favour of regularly using cute nicknames with a partner.

What’s more, a large number of Canadians have no qualms about people overhearing these mushy monikers. While this 92% does include 43% who prefer to keep their couple nicknames private, the majority (49%) use them with abandon, proclaiming that they ”think it’s sweet.” That leaves just 8% who say that pet names make them cringe.

This cringe might, however, be stronger in some provinces than others. Those in British Columbia seem to experience the strongest case of nickname unease: 12% wince at the thought of using them, while 50% would use them only in private. At the other end of the scale are those in Ontario, where only 6% dislike using affectionate nicknames and where 52% are happy to call a partner by their pet name any time, any place.

EliteSingles psychologist Salama Marine says that we are so attached to the idea of nicknames because they ‘’are indicative of a certain dynamic between the couple.’’ A playful couple may choose something silly, for instance, while a more tender-hearted couple may opt for something mushier; the names indicating ‘’a sense of complicity between two partners.’’

What’s in a nickname, anyway?

It seems, then, that using affectionate nicknames is a regular part of Canadian romance. But is it better to use a popular nickname (like Sweetheart, Honey, or Babe), or to come up with something unique and special for your little turtledove?

Those in the survey were somewhat divided. Of those that like to use terms of endearment, 46% want to use names like Babe, while 54% would ideally opt for a unique nickname that had personal meaning. However, there’s a good chance that more people would use something unique if they could only think of something good: 63% of those surveyed admit that they’ve had trouble in the past with thinking up a suitably distinctive nickname for their beloved.

Marine does suggest, however, that making the effort is worth it, saying ‘‘an original nickname, which was created just for [your partner], will make them feel unique.’’ She goes on to say that, if you can’t think of anything, ‘’in the same vein, positive names like ‘My Treasure’ or ‘My Gem’ will make them feel that they are precious.’’

If you have questions or comments about this article, or if you want to share your favourite term of endearment, then please comment below or let us know at [email protected]

1 Languages of love: 10 unusual terms of endearment. From the BBC magazine, 2013. Found at http://www.bbc.com/news/magazine-22699938. Also; Benny Lewis, 77 Weird and Romantic names for the International Lover, from Fluent in 3 Months. Found at http://www.fluentin3months.com/valentine/